International Women's Day - Experience with Males in the Legal Field 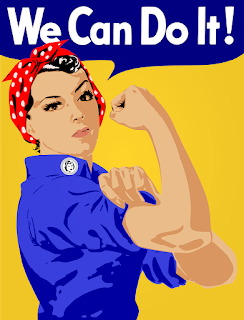 Yesterday was International Women's Day.  On twitter I read several threads about women lawyers dealing with inappropriate male bosses, yet overcoming their situations and continuing on into their legal careers. I thought these stories were inspiring and many were shared by very strong women.  These women were no shrinking violets, but they were overwhelmed with the situations that they found themselves in.

When I first started practicing law, I worked for an older man (somewhere around 50).  He previously had been an entertainment lawyer in Miami, Florida.  I don't even know how to describe this man.  He was scum. We worked in an area of the law dominated by women.  Most of our state contacts were women. He hit on women that he was attracted to, yet he was married with a kid.  He was probably more than twice the age of the women (just fresh out of college) that he was hitting on.  One girl reported that he bought a bottle of her favorite perfume (expensive) and gave it to her as a gift.  She was surprised and shocked.  (It wasn't her birthday or anything).  He asked to take out to dinner.  She declined.  My experience with him was first he showed me and our 21 year old assistant a video produced by a former client of his which included various women, scantily clad in bikinis, seductively posing by a pool while a rap song played in the back group.  It was weird. It was just us and him and he continually prompted us to look at the screen.  Another time he came in my office and closed the door and told me that he overheard a co-worker and I planning to go out dancing on the weekend.  He repeated several times that his wife was out of town and that he would like to go with us.  He then stated that I reminded him of an ex-girlfriend of his and that we could crash at this house if we wanted to.  You know if we were too drunk to drive home.  Yeah, no we didn't invite him to go out with us.  Yet another time we went to a conference in Miami.  I went out with some of my co-workers and we had drinks and went dancing.  It was fun and all of us, but our designated driver, were a little tipsy.  When we got back to the hotel we saw him sitting downstairs in the lobby.  He came over to talk to us and wanted to walk me back to my hotel room because I was drunk and he wanted to make sure I was safe.  Problem was I wasn't that drunk.  I had maybe 3or  4 drinks over the course of about 5 hours.  I was sitting quietly eating my chicken nuggets.  My friend Kristi loudly told him "No" and that we would walk as a group back to our rooms.  Thank God for good friends.  He later got in trouble to kissing another female co-worker at that same conference.

My third lawyer job put me in contact with a guy who felt that most women lawyers were lesbians.  He couldn't understand why a straight woman would work in such a demanding career field.  He was a terrible attorney and never should have been practicing law.  He was my supervisor.  He would buy all of us women presents and try to get close to us.  If we were not receptive to his advances he would then try to convince us to "come out to him" because surely we were lesbians (just like all of the other female attorneys).  It, of course, could not have been that we were in our 20s and he was 48 years old (and married with 5 children and an ex-wife).  Feel my sarcasm there, it's heavy.

My fourth and current lawyer job opened me up to all new kinds of misogyny.  This was the first time (After practicing law for 6 years) that I was mistaken as a court reporter by male opposing counsel and male witnesses.  Another male opposing counsel invited me into his office after a deposition to talk about our schedules (something that is typically done through email by assistants) for mediation. Stupid me willingly went into his office and he gestured for me to sit while he went to his desk.  His office had a small chair, a large couch and a then another small chair for guests with a table next to that chair.  These were facing his desk on the other side of the room.  Since I had a large bag (containing my materials for the deposition) and a purse I sat on the couch and placed my items beside me so I could fish out my phone and written calendar.  Again, this is an older man in his mid to late 50s.  He starts reading off dates from his computer calendar and asking for my availability.  Then he walks over to the couch and sits on it with me, moving my bag to the floor so that he is directly next to me.  It instantly creeped me out.  Frankky, I was creeped out as soon as he came from behind his desk.  I realized I had made a mistake by even coming into his office.  I told him I needed to get on the road (I had driven about 3 hours to get to the deposition).  He put his hand on my lege to stop me from getting up and asked me to stay for a late lunch.  I think the look on my face said it all.  I left unharmed and unmolested (at least any further) and he was meaner than a hornet to me for the rest of that case.

My current boss is almost 70 years old and behaves that way.  He tells inappropriate stories and makes inappropriate jokes.  He called his wife one day from work and told her to meet him at home for his lunch break and to get the viagra ready.  He thought it was hilarious.  Yes, 3 of his female staff were sitting in his office at the time.  He loves looking at women's breasts and he will sneak looks whenever possible.  I wore a v-neck shirt to work once.  A normal t-shirt nothing extraordinary, but I do have large breasts and when I was sitting my breasts were more prominently displayed due to my position.  My boss came in my office at the end of the day and told me to find a document among a stack of papers.  I was annoyed because the stack was huge and it was the end of the day.  I started going through the stack leaning over my desk and flipping pages while he stood there above me. Not realizing why he wasn't helping- I chalked it up to his usual laziness and thought that associates should do the tedious work.  As I narrowed down the stack, I picked it up and rested it on my lap. with about 500 pages left, I started flipping the pages towards me that were not relevant.  He stopped me at one point and picked up a page that was laying against my chest. Of course, accidentally grazing my chest as he did so.   It wasn't the page he was looking for.  With that I stood up and told him the project would have to wait until the next day because I needed to leave.  I could go on and on, but I'm out of time and I wanted to put this post up yesterday.

The bottom line is that I am still practicing law and I haven't let anyone run me out of the profession.  Women are described as weak and not being able to tough it out in litigation.  That's the excuse as to why so many women lawyers in appellate law and as in-house counsel.  Women are strong and put up with so much.  The problem is most people ignore and minimize the barriers that we have to go through.  Sometimes these barriers are invisible to others, but they are real.