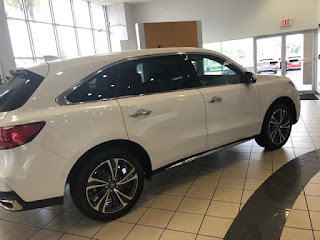 Spoiler Alert: I have not yet purchased a car.

My car shopping adventures began on December 30, 2019. My first stop was the Acura Dealership.  The sales guy was super nice.  Nicest and the most well informed of all.  We test drove an Acura MDX.  It was a nice car.  I don't like the body style and the brakes were mushy.  However, Acura is the luxury version of Honda, so I thought it might be worth a shot. It was a nice car with lots of options and all the safety features. Lane departure assist, collision avoidance, adapative cruise control, etc . It also had the cool push button gear selector, a push button start, back up camera, infortainment screen, etc. I was not excited about the car.  Hondas have all of the same features for less money.  There was nothing about the car that made me feel that I should consider it over any non-luxury model. Maybe I don't understand luxury vehicles???

I really thought as a luxury vehicle it would have something that I could not get in just a regular car. Ultimately, I reasoned that I could get a Honda with a nice package and pay$10,000 to $15,000 less than what I would for an Acura.

P.S. I also hate that idle stop/start feature that they are putting on new cars.

Acura has come off of the list. Next up: Honda.